Do you remember where you were on Halloween, 1981? I was immersed in Zappa music. Frank was appearing live from New York City’s Palladium on MTV, while the Grandmothers were playing at some club in Hayward.

My friend Eric tended to the massive and complicated VCR apparatus in order to record the Zappa concert, while I was dispatched to take in the Grandmothers. At the time, the Mothers of Invention alumni were on frenemy terms with Frank. Jimmy Carl Black had sung “Harder Than Your Husband” on You Are What You Is, but Black, Don Preston and Bunk Gardner had also sued Zappa for $12 million. They eventually prevailed, which Frank called “a travesty of justice.”

Jimmy wasn’t so kind in his estimations of the man whose music had given a bar blues musician an extraordinary career, a legend and considerable income. 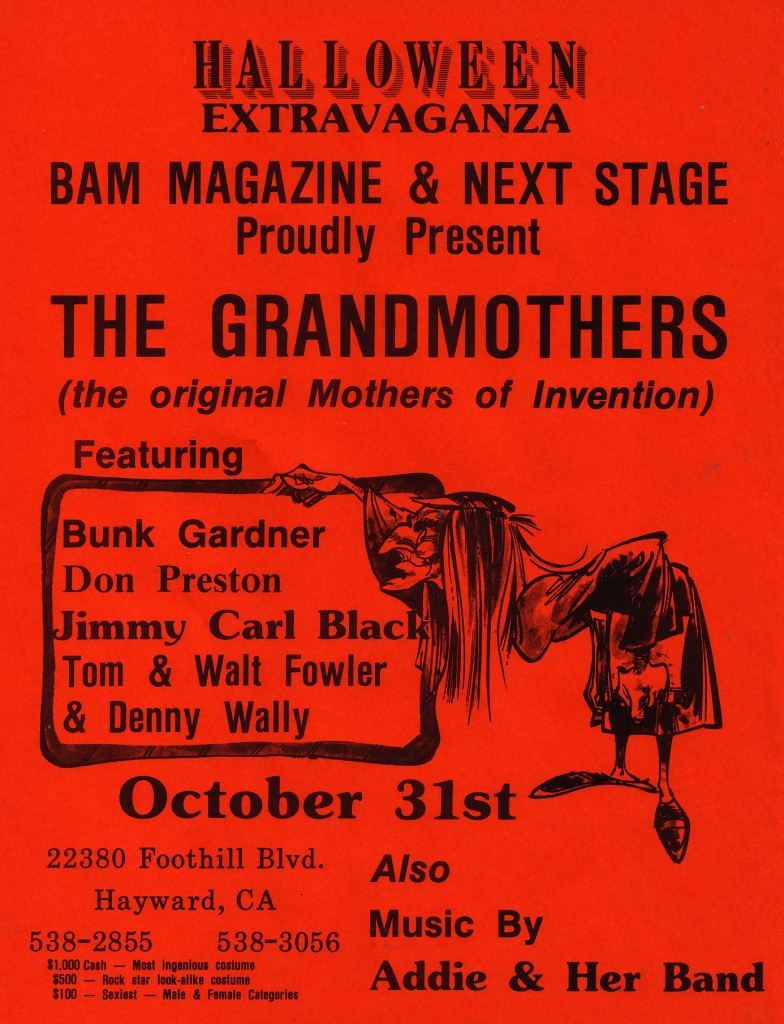 Yes, I hang on to debris like this in case I need it someday. And as fate would have it, I did!

Replaced by drummers who could keep up with Zappa’s increasingly complex compositions, the former Mothers countered with a narrative in which Frank had held them back from unleashing their real musicianship with his rigid, pedestrian arrangements. They basically said he took credit for their work, while claiming anything good about it was their doing.

So when I went to the Grandmothers show, I wanted to see what they were really capable of, untethered from the domineering Zappa. There, Jimmy brandished a macramé pillow with a Frank face on it, punched it, threw it around and generally abused it while making disparaging remarks. Classy.

But the real shocker was the music. The songs were carbon copies of stuff off the Mothers albums. The Uncle Meat material was note-for-note identical. Where was all the pent-up creativity that they were now free to unleash?

If you're going to take a massive dump in the press on the best thing to ever happen to your musical career, you'd better have the chops to justify your claims. If they did, they didn't use them, preferring to recite the same old album versions of songs. I imagine that with a couple days of practice, many of the musicians in the audience, including me, could have done that.

So I didn’t get a good impression of the early Grandmothers. It all confirmed for me Frank’s position, that he simply needed a better grade of sidemen to adequately perform his demanding music.

As for Addie & Her Band, I have no memory of their musical efficacy or clue as to their destiny. I can't say I've heard of them since them.

With this ancient negative impression, I didn’t have high expectations going to the GrandMothers of Invention show at Humbrews last Friday night. That made the pleasant surprise all the more enjoyable – the GOI are a cooking band that plays fierce, delicate and in the moment at all times.

Only Don Preston remains in the reinvented GrandMothers. The other superstar of the Zappaverse in the band is the inimitable Napoleon Murphy Brock. He fuels the entire proceeding, radiating authentic Zappatude.

Massively accomplished drummer Chris Garcia is the band’s powerful engine, while the Bryan Bellerish Dave Johnsen on bass and nerdly-but-fiery Max Kutner on guitar (all teach their various instruments) round out a hugely invigorated GrandMoms. You have continuity and provenance with young energy and the ageless gusto of properly performed Zappa music.

If there’s one thing that doesn’t interest me in seeing live music, it’s the ritualistic aspect, especially with classic rock. Frank always made his music live, reapproaching it different ways to keep it real and yield fresh delights. Going through the motions would be worse than doing nothing at all.

Thankfully, the GOI follow the best Zappa tradition. They took the  music and ran with it. You can’t really say they “made them their own,” but since Brock’s stylistic fingerprints are all over lots of the original, definitive versions of the Zappa tunes, like the stunning “Village of the Sun/Echidna’s Arf/Don’t You Ever Wash That Thing?” sequence, it is truly authentic.

Anyone who attempts that complicated piece and basically, any of Frank's music, had better know what they’re doing, and the GOI do. Starting off with a drum solo/scat singing composition by Garcia, the band plunged into a succession of Zappa tunes with force and enthusiasm.

There are a number of Zappa tribute bands, many distinguished only by their sincerity. At worst, they sound like community college jazz bands that someone has coerced into reluctantly performing a Zappa tune. Not these guys.

Frank once said that he liked any form of music “that has eyebrows on it.”

While I went into the GrandMothers show with one eyebrow arched, I came out with both elevated in pleasant surprise at this capable band’s zesty Zappasimilitude.