In a seeming attempt to “buy votes,” Lane Devries had flowers delivered to a few doorsteps in the Westwood neighborhood early Saturday morning, along with a letter signed by Mr. Devries himself. This letter was written on stationery with Sun Valley letterhead.

Mr. Devries states in his letter, “We have listened carefully to the concerns of the community related to ALC’s proposed project” which is grossly inaccurate. Sun Valley, operating as Arcata Land Company, has only recently reached out to one person, Sean Armstrong, who attempted to hand-pick select people to take part in what was a failed Zoom meeting with two people.

If Sun Valley/ALC had listened to the community, they would have solicited the community opinion four years ago when this project was on the drawing board. 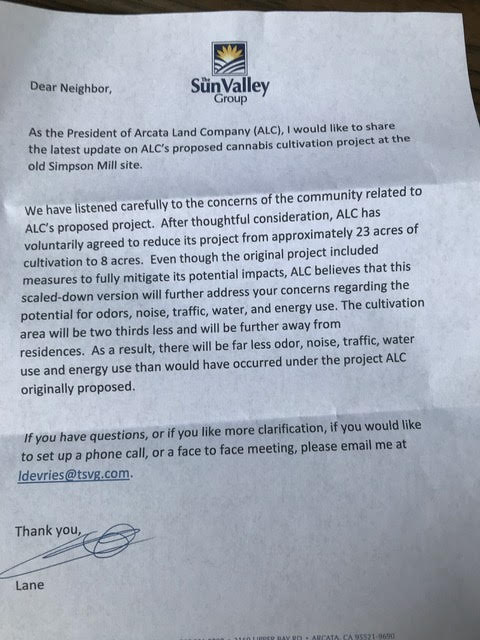 The letter states that “there will be far less odor, noise, traffic, water, and energy use than would have occured under the project ALC originally proposed.” But the original proposal said there would be no significant impacts. Submitted photo

They’ve had four years to reach out to the community and only did so on April 1st offering a tightly controlled option for a select few. The vast majority of neighbors are against this project no matter what the size.

We feel, at a minimum, there should be a full Environmental Impact Report done that is specific to this project. Mr Devries knows this. Why is he afraid of having a full EIR done?

Mr. Devries goes on to say ,“Even though the original project included measures to fully mitigate its potential impact” another patently false statement. Humboldt County’s own Final Environmental Impact Report (FEIR) regarding commercial cannabis activities in the county as a whole states, under the MAJOR CONCLUSIONS OF THE ENVIRONMENTAL ANALYSIS, “[Any cannabis] project’s contribution to cumulative air quality impacts involving particulate matter (PM10) emissions would be cumulatively considerable and significant and unavoidable.”

Regarding odors, the FEIR further states: “[Any cannabis] project’s contribution to cumulative impacts from exposure of people to objectionable odors would be cumulatively considerable and significant and unavoidable.”

Another statement made by Mr. Devries in his letter is “ALC believes this scaled-down version will further address your concerns regarding the potential for odors, noise, traffic and energy use.”

This again, is untrue. The ocean is 2.5 miles to the west of us and is easily heard with just a slight breeze coming from that direction in a locale that often sees sustained winds of over 20 mph.

It’s hard to believe that the noise from all the fans ventilating the 8 acres of hoop houses will not be heard. We frequently hear the voices and music from workers currently working in these fields. The residences on Foster Avenue will undoubtedly hear and experience the increase in truck and automobile trips due to this project.

Regarding his comment about energy use: The analysis in the Initial Study/Mitigated Negative Declaration (IS/MND) reported that the daily energy consumption from the 5.7 acres of the mixed-lights would be 1.9 Megawatts (that is the equivalent of 2.4 percent of the entire county’s daily energy demand!). The 5.7 acres of mixed light hoop house was not scaled-down in this new proposal.

It should also be noted that Sun Valley will be burning natural gas to produce 3 million BTUs/hr. from the planned gas boilers.

Lastly, Mr. Devries says in his letter “As a result, there will be far less odor, noise, traffic, water use and energy that would have occurred under the project ALC originally proposed.”

Wait, did he not say that all these things were mitigated for in his earlier statement? He clearly states here that there WILL be odor, noise, traffic, increased water and energy use when earlier in this same letter he claims all these would have been mitigated!

I urge Arcata and other Humboldt residents to express their opposition to this ill-conceived project by sending an email by Wednesday, April 21 to [email protected].

Jim Cotton is an Arcata resident and member of Team 27.