HUMBOLDT – The essence of Humboldt will make its way to Washington, D.C. this fall in the form of Christmas trees, hand-quilted tree skirts and tree ornaments.

It’s a first for a California tree to be featured on the West Lawn of the U.S. Capitol. An 84-foot white fir tree from the Mad River Ranger District has been chosen. 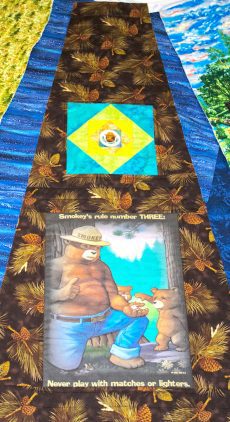 And that tree will not be alone. Forty-nine companion trees will also be sent from Northern California to be decorated and displayed in the headquarters of many departments.

And those last three trees will be graced by quilted tree skirts, lovingly designed and sewn by members of three local quilting guilds.

Maggie Stimson and Susie Freese of the Redwood Empire Quilters Guild displayed pieces of the tree skirts on Stimson’s deck and explained the project.

The pie-shaped wedges of the quilted tree skirts were laid out in the sun, awaiting the big job for Freese: piecing them all together.

All things Humboldt are included in the quilted imagery of the large skirt – dairy cows in Ferndale pastures, quail and California poppies, a bear eating blackberries, magnificent Redwood trees in all styles, a Yurok themed section including basket caps, a woven infant basket, and  a Flicker and a Woodpecker, several ocean themed sections featuring all manner of sea life and lighthouses, even a section with Bigfoot as Santa and his sleigh being pulled by sequined banana slugs instead of reindeer. There is even a tribute section to our firefighters.

It’s what you could call 15 feet of love, as each quilter picked a theme of a part of Humboldt that meant the most to her.

Each section of the quilted tree skirt is more amazing than the last, in use of fabrics to enhance the design, in the variety of quilt stitches, in the choice of colors, and in the wide variety of designs themselves from the very traditional to the wildest quilter’s dream. Naturally, all the stitching was perfect.

“The ladies went all out,” Freese said. “For the short amount of time they had, they did an incredible job.” 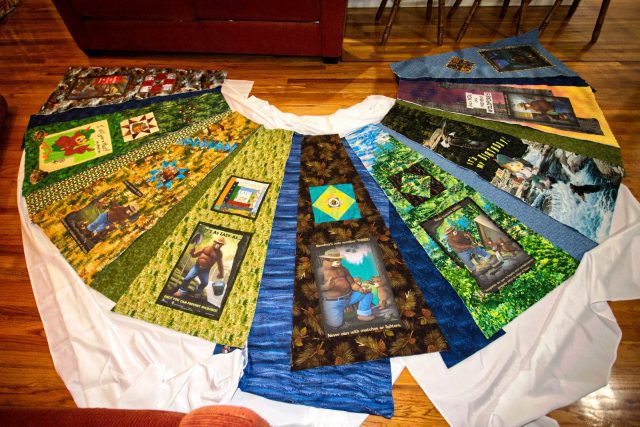 The two smaller 12-foot skirts are also under construction. Stimson explained that she had downloaded posters of Smokey the Bear and Woodsy Owl off the web. Then she had them made into fabric. “It’s Woodsy’s 50th birthday,” she said. That skirt featured fabrics appropriate to forests and many of Smokey’s rules.

Smokey Bear (his proper name) has been appearing on posters, postage stamps, radio, and television since 1944. A wide range of celebrities including Rod Serling, Ray Charles, Barbara Mandrell, and Ted Nugent have made commercials for Smokey.

Woodsy Owl (“Give a Hoot, Don’t Pollute”) has been inspiring kids since 1971. His updated slogan is “Lend a Hand, Care for the Land.”

Each segment has the name of the quilter on the back. Stimson is putting together a booklet on the making of the quilted sections. Each page will have information about the quilter and her design.

“We hope to display the quilted skirts at our 2023 quilt show,” she said. 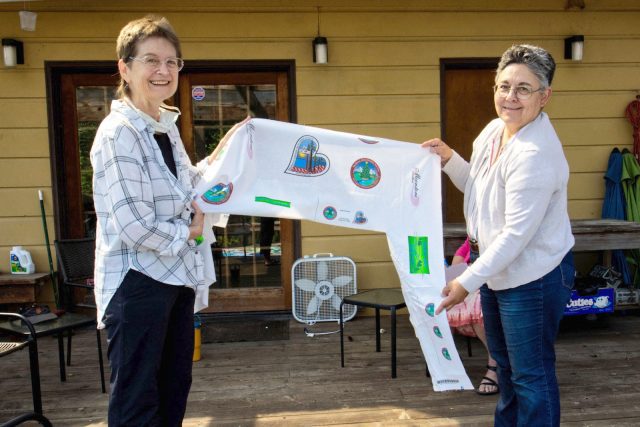 The tree skirts are done but the Six Rivers National Forest has extended the deadline for handmade ornaments to September 15. Last week their website announced that they were halfway to their goal of 15,000 ornaments. Drop off locations from Crescent City to Weaverville as well as a mailing address can be found at uscapitolchristmastree.com/ornament-tree-skirt-drop-offs.

Linda West who has been retired from Six Rivers “for seven years” is volunteering on the ornament project. She also volunteers at the Boys and Girls Club of the Redwoods where the kids have been making ornaments. “It’s just such a positive experience for Humboldt County,” she said. “We’ve been doing Bigfoot ornaments,” she said. “I think that’s going to be a big hit.”

West is planning to travel to the Capitol to see the trees when they are up and decorated.

To see the trees on their whistle stop trip in late October through Humboldt County, watch for local announcements or check the website, uscapitolchristmastree.com.