ARCATA – Having risen up before to redefine itself as Arcata’s Arts and Commerce neighborhood, the Creamery District is organizing again –this time, to repel a wave of burglaries ravaging small businesses there.

In recent weeks, several businesses have been hot hard by nocturnal robbers against a background roar of other forms of thieving.

The Redwood Raks dance studio, located in the Old Creamery Building, was robbed of merchandise and computers just last month. 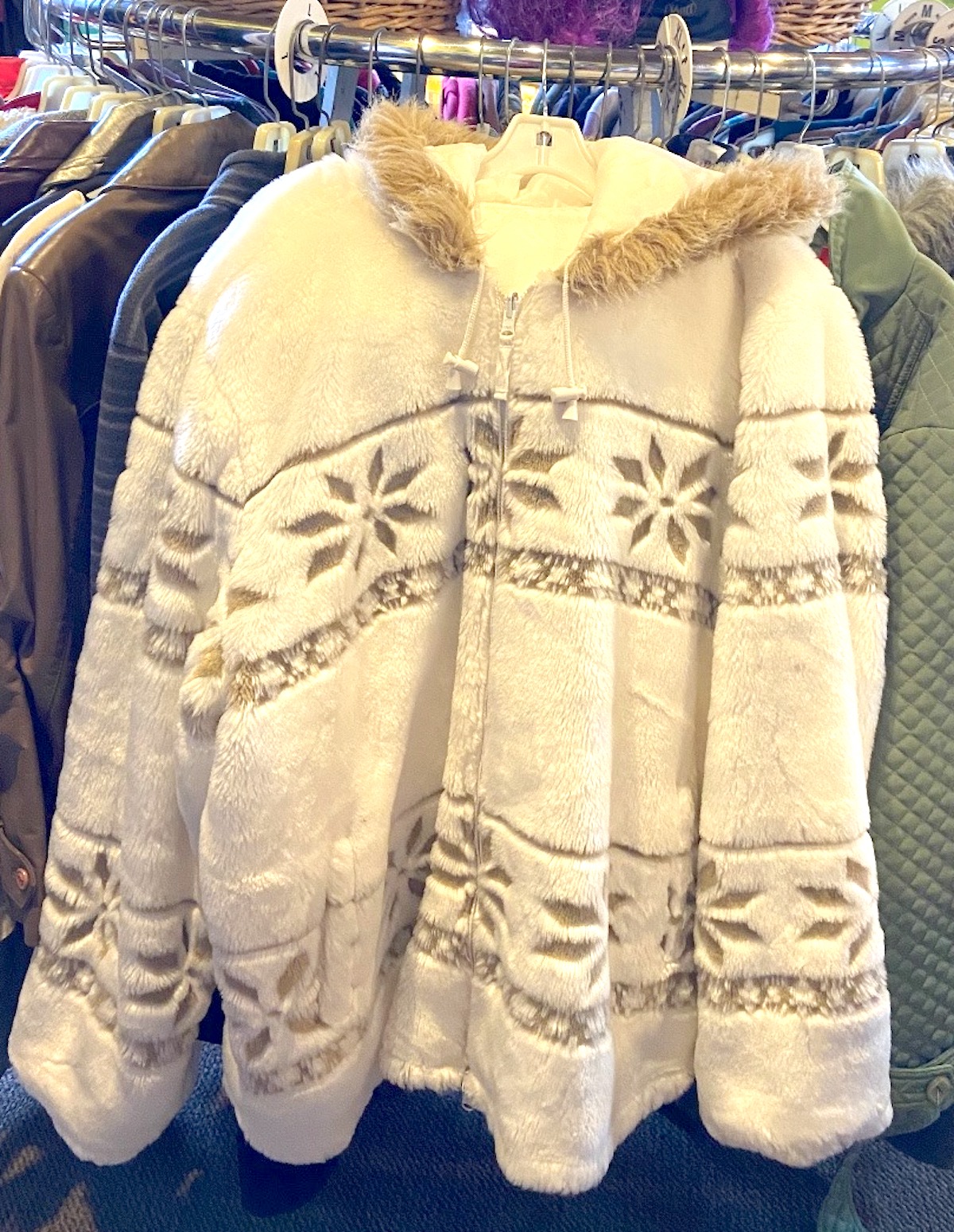 This distinctive coat was stolen during the Clothing Dock break-in.

The male half of the suspected Clothing Dock burglary team.

The day after Christmas, the Clothing Dock vintage clothing store at 11th and K streets also suffered a debilitating burglary at the hands of what owner Susan Paul called “two heartless individuals.”

Paul detailed the losses: “Among the items that were stolen is an extensive collection of sterling silver jewelry – over 300 rings, a full-locking case of earrings plus all of the back stock, bracelets, pendants, nose pins, vintage costume jewelry and more along with clothing items (30-plus skirts and some jackets),” she said.  "Pretty much wiped us out. In six minutes.”

The other suspect, captured on video.

Paul said the robbery was demoralizing. “Coming on the tail-end of an already trying year for small business this has been beyond devastating for us,” she said. “It’s many many thousands; 20 years building this inventory... It feels like I’m back to square one in some ways.”

Last week, members of the Creamery District, Arcata Police and others participated in a Zoom meeting to discuss options for a response to the crime wave.

In addition to the two above break-ins, the Bang Bang Vintage/Consignment shop was robbed by night, and a number of other petty thefts have occurred. Area businesspeople report sketchy individuals hanging out around the building.

APD Sgt. Brian Hoffman said that since no one is jailed over property crimes any more, “there’s currently no repercussions for people to stop this behavior. Due to the COVID-19 pandemic, the Humboldt County Jail only books those charged with violent felonies, domestic abuse and public drunkenness.”

Hoffman said that the perpetrators tend to be meth and heroin users. “It’s probably a small amount of people, but they’re prolific,” he said. Even when caught, the suspects are just “cited out” and go back to the business of plunder as usual.

Darlene Spoor, executive director of Arcata House Partnership, said that following incidents of mischief at the Ninth Street Annex by the Transit Center, her organization allows a couple of homeless individuals to camp in the area at night. Their role is to act as passive night watchpersons, and alert authorities should anything untoward crop up.

Spoor suggested something similar might work at the Old Creamery and area businesses. “Maybe that’s something that we could do to work with you guys,” she said. “Figure out a place where people could pitch a tent at night and make sure they’re gone at 8 in the morning... and there’s a presence there.”

Hoffman said “a lot of small businesses” make similar arrangements with homeless individuals, “and they basically hold security duty at night. If you can find the right person to do it, it does work.”

Spoor offered support for the homeless night watch notion. “If people think that it makes sense to have one of your friendly neighborhood transients to kind of be there, I can provide tents, I can provide blankets, I can provide food to whoever is that person or people or group of people you may select to try to be the ‘eyes of the evening’,” she said. “If it works, this might be just a wonderful opportunity to start changing the way people who are homeless are seen.”

Hoffman said homeless people who do this kind of duty “are very protective of the property” and appreciate the hassle-free lodging. “If you can find the right person, it does work,” he said.

Paul said she was willing to consider the idea for her business.

The group also discussed use of Facebook and Nextdoor for online sharing of information on incidents and suspects.

Hoffman said, “sometimes you’ve gotta think outside the box, and it’s all in the person who you get.”

The group plans to continue to meet and develop that and other ideas.