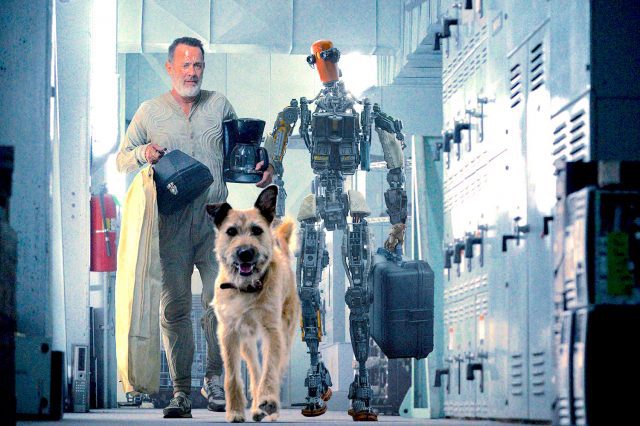 We have some exciting news this week. Redwood Pals has a movie star!

Almost three years ago now two dogs were found on Highway 36 on a cold and snowy day. A female border collie was down at the highway when a kind woman spotted her and tried to help her. For some reason the dog wouldn’t come over and kept running back up the hill. Finally the woman was able to make out a brown dog camouflaged up on the rocky hillside. The border collie wouldn’t leave without him and the brown dog couldn’t get down.

Eventually the dogs both ran back up the hill and the woman breathed a sigh of relief, thinking they were heading home. She got back in her truck and started off but as soon as she rounded the corner, there they were! This time they were willing to get in the truck and she loaded them up, called Animal Control and headed into Hydesville to meet an officer. The dogs were then transported to the shelter.

No owner came forward after the four-day legal hold and the dogs were temperament tested. The female passed and was adopted almost immediately. The male, now named Seamus, did not pass and eventually became a rescue dog. The more we worked with him, the more we liked him.

A few people expressed interest in him but no takers until the day we got a call from a Hollywood trainer! She had seen his photo and was very interested. We sent more photos and some videos and before we knew it, she was headed up to get him!

She drove up one day, we met and had dinner and the next morning she came to the shelter and loaded him up for the long trip back to LA. There’s lots more to this story, but I’ll save some for another day.

Seamus had many adventures but the biggest was landing a major role in a movie with Tom Hanks. We were sworn to secrecy until the movie was announced, never anticipating the pandemic and the effect that would have on Seamus’s film Finch.

Finally there is a release date, November 5 of this year! In Finch, a man, a robot and a dog form an unlikely family in a post-apocalyptic world as the man tries to ensure that his beloved canine companion will be cared for after he’s gone. Definitely something dog-lovers can relate to.

As exciting as this all is, the real story for us is that a rescue dog that was considered potentially unadoptable went on to charm everyone he met and made a name for himself.

Which of our other rescues is a diamond in the rough? The 120-pound mastiff who is a handful on a walk but can make us laugh when he goes under and over the little agility hurdles in the playyard?

The dog that was dumped at the shelter (yes, you saw that in the news) who is too loud in his kennel but passed every test Fern could put him through – taking toys from his mouth, being humped, playing hard?

The little scaredy Chihuahua that will barely look at the people who come to meet her but who is a happy little clown for us?

Seamus’s story keeps us going on days that we might otherwise be discouraged.

One of the dogs we are currently working with is Gypsy. She is about a year old and is some kind of hound mix.

Gypsy loves other dogs and is a great player. She hasn’t had much training and we don’t really know anything about her background but she is eager to learn and wants to make people happy.

One of her favorite games is to be in the yard with two of us and go back and forth as we call her to come. She learned so quickly to sit on her approach instead of jumping up on us.

She loves to be pet and is very alert for anything that will earn her some attention. She needs to keep working on her leash manners, but we think that will continue to improve as we learn more about what motivates her. This pup is definitely another diamond in the rough!

Contact Redwood Pals at [email protected] or leave a message at (707) 633-8842 for more information or to meet Gypsy.