ARCATA – Arcata Scrap and Salvage was the scene of a savage battle Saturday night. There, in their comfort zone of heaps of jagged metal, an array of unsavory underworlders went after their leader, Badger, inside a sort of mini-Thunderdome coliseum while a small army of spiky, leathered-up ne’er-do-wells gyrated merrily on the periphery.

Things did not go well for Badger’s burly beraters, though. One by one, the baddest of Bottomtowners repelled his savage challengers. Target tried a knife attack, to no avail. Dentures couldn’t take a bite out of Badger, while Orca’s martial baton proved a mere trifle for the veteran brawler. Not even Blig’s spiked club or Rusty’s acid attack could bring down badass Badger, probably because he can channel Earth’s electrical field and shoot compression blasts from his hands.

The incident wasn’t reported to police, as the gang prefers to settle its issues internally. Plus it was only a scene from a movie, and the antagonists were soon to share refreshments around the craft service table anyway.

“He’s doing it for recreation,” said Suza Lambert Bowser, director of Flea, explaining Badger’s motivation. “He takes them all down – a Bottomtown bash – it’s what they do for fun.”

Bruce Cole, who plays Badger, designed the fight choreography. “So guess who wins?” he joked.

Motivation was in abundant supply on the scrapyard movie set, as spiked and tatted actors mingled with fleece-vested crewmembers. Bowser was effusive with gratitude toward scrapyard owner Bonnie Branaman, who turned over the ready-made film set to her production. 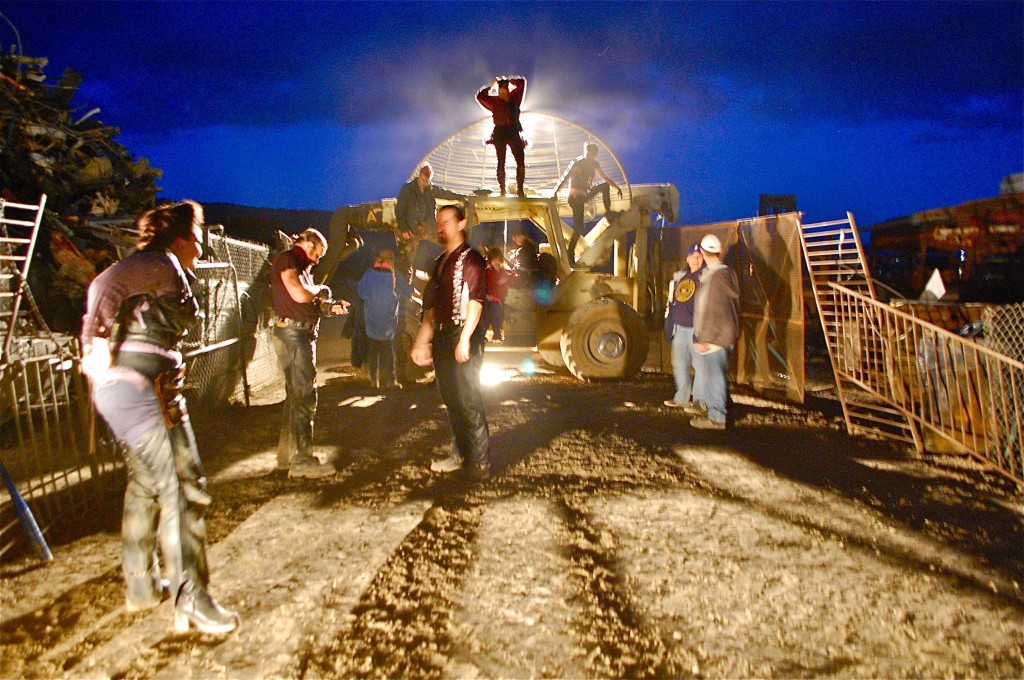 Between scenes, actors playing gang members relaxed, letting themselves revert to being the normal Arcata sweethearts they really are. “Ooh, a mosquito!” squeaked one menacingly punked-out young woman in black.

The scrapyard shoot capped a week of productive location filming for Flea. Bowser and her unit also shot both day and night scenes on the Plaza.

Bowser praised APD Sgt. Jaynie Goodwin for helping tame the torrid town square for the occasion. “She was really cool with us,” Bowser said.

The Flea crew shoots scenes on the Plaza. KLH | Eye

Some personal diplomacy was required to calm some bellowing drunks on what turned out to be Pint Nite. One loudly evinced beery moral indignation at “you people from Hollywood” until Bowser went over and notified him that she has lived in Arcata for decades. “Welllllll,” he countered huffily, if not convincingly. But he managed to contain his howling after that.

The locals were less confrontational out on the Arcata Bottom, where shooting took place amid what Bowser described as “300 extras and their swaying udders.”