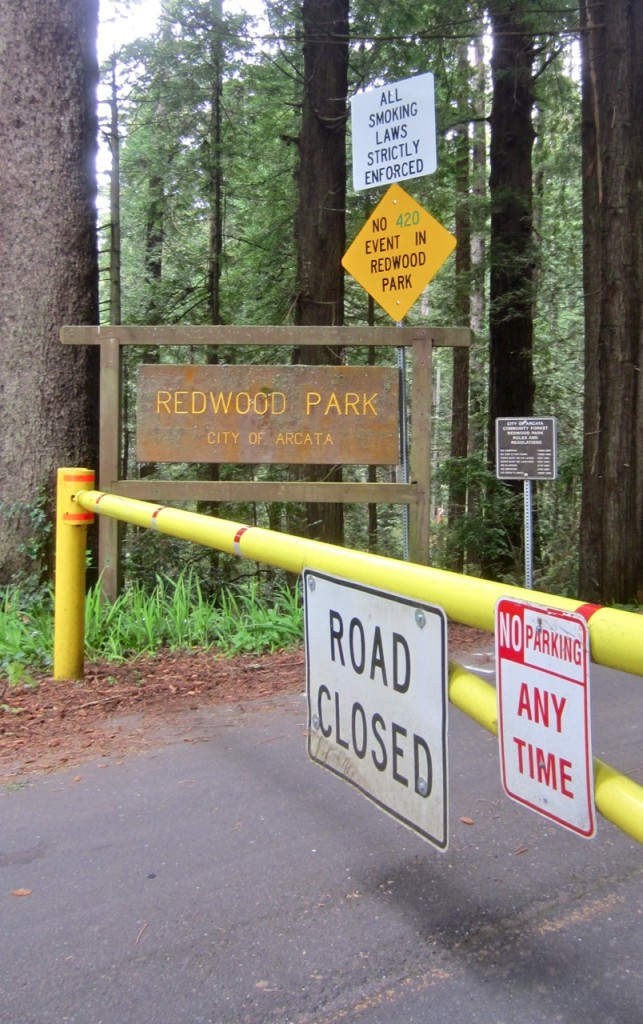 Lest there be any doubt about the will of the City of Arcata regarding 4/20. Photos by KLH | Eye

REDWOOD PARK – The world will little note nor long remember 4/20 2013, because on that fine spring Saturday, suddenly, nothing happened.

This despite the fact that for the first time in years, it wasn't raining. Except figuratively, as the City showered a full complement of cops and APD's imposing Critical Incident Response Vehicle on Redwood Park, greeting any random stoners who wandered in with massively mellow-harshing buzzkill factors.

At around 10:20 a.m. two young sulked on a bench near the playground. Asked whether all the hardware and officers were just for them, one said, "The man is trying to keep us down."

Over in the Redwood Lodge, police were getting ready for their 11 a.m. briefing. APD is well-practiced at this by now, and, playing to stereotypes, had two large boxes of donuts – Safeway donuts – at the ready.

Asked about the alleged down-keeping mission, Lt. Ryan Peterson said, "Uh..." He had no immediate information on that sort of directive, but said he'd look into it.

Two guys sat in the park's playground, away from the incredible volume of noxious fumes the Critical Incident Response Vehicle puts out while running the generator for electricity. The two bench-sitters weren't in a real good mood.

APD Citizen Volunteers eventually arrived to person a checkpoint at the entry road, and, if the advance press release didn't do the job, the entrance to the park was festooned with signs that removed any remaining doubt as to City policy toward 4/20.

Parks Dept. personnel gave the meadow sprinklers a good workout, ensuring that the aromatic fish emulsion fertilizer which had been applied to the grass the day before would soak in.

Though once a popular attraction, no individual or entity ever assumed responsibility for 4/20 in terms of taking out permits, arranging security and sanitation. Arcata Police used to stay on the sidelines, managing traffic and remaining available in case of emergency. But complaints by townsfolk, including Redwood Park neighbors whose property was trespassed on and driveways blocked,  the cost of park cleanup and repair, plus the rise in petty crime around town concurrent with the event, compelled a clampdown.

Both state law and the Arcata Municipal Code give police plenty of enforcement tools. Smoking of any kind is illegal in a park that has a playground. That and regs against loose dogs, drinking and camping all attract the interest and citation books of the abundant officers.

Stoner flooded the park in anticipation of the day's marijuana merriment.

But neither cops nor ticket books got a lot of exercise. While the sun eventually broke through, the hordes of cannabinoid-infused smokers who had populated the park in days of olde never did.

"Not much to report," said Incident Commander Lt. Bart Silvers afterward. "It was a beautiful day and there were families enjoying the playground, trails and meadow area. I believe we had a total of five infraction citations and that was it. It was great to see the park being used by the community for its intended purpose."